FSNI initiated a Transformation Programme in 2013 which included two capital projects – a new state-of-the-art laboratory and a new IT system and a service improvement project. 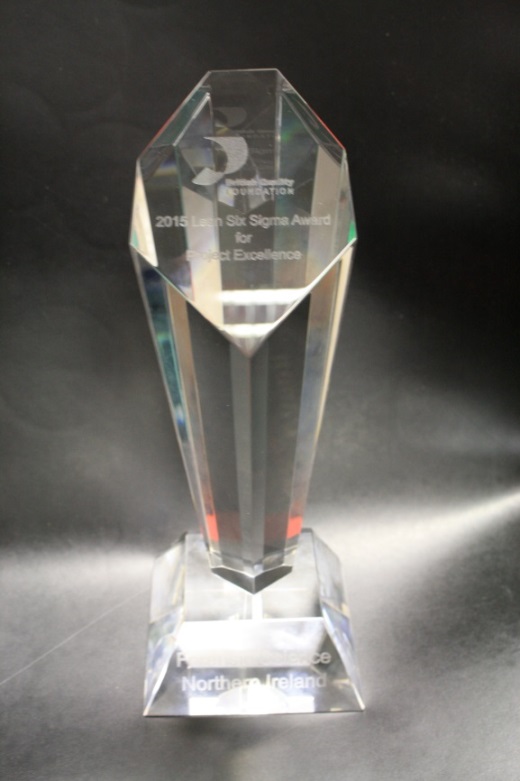 The drugs review team succeeded in originally improving laboratory turnaround times by 55% and increasing capacity by 13%. This was as a direct result of the Lean Six Sigma review. Motivated by their achievement thus far the drugs team increased capacity by another 11% following further continuous improvement.

FSNI was nominated by Martin Brenig-Jones, Managing Director of Catalyst Consulting, for the British Quality Foundation (BQF) Lean Six Sigma Award. In July 2015, members of the drugs review team presented their project to a BQF judging panel and were selected as finalists.

On 15 October 2015, the Awards Ceremony was held in the Intercontinental London, Park Lane.  Baroness Karren Brady CBE, of Vice-Chairman of West Ham Football Club and The Apprentice fame, presented the award to Forensic Science NI. FSNI were joint winners with Coopervision. This is a tremendous honour especially considering the illustrious competition from the other finalists AES UK & Ireland, Ricoh UK Ltd. and Virgin Media.

FSNI is delighted to have received national recognition for the team’s efforts in improving services to our customers. As David Ford, Justice Minister, said in a recent press release, “This is an excellent achievement, well deserved by the staff in FSNI and particularly by the staff in the drugs discipline who have been instrumental in driving projects to improve service delivery, not just in FSNI but across the DOJ”.

This drugs review, along with the remainder of the other service improvement project reviews and the capital transformation projects demonstrates FSNI’s continuous commitment and contribution to the Minister’s mission of achieving ‘faster, fairer justice’.