Dogs invaluable in fight against drugs in prisons - Long

Cannabis, cocaine and mobile phones. These are just some of the finds made by search dogs in Northern Ireland prisons, Justice Minister Naomi Long said today.

In the past three years search dogs have sniffed out significant finds of cannabis and cocaine, pregablin capsules and other illicit substances stashed by prisoners at Maghaberry, Magilligan and Hydebank Wood Secure College and Women’s Prison. More than 20 mobile phones, phone chargers and sim cards have also been discovered by search dogs in the same period. 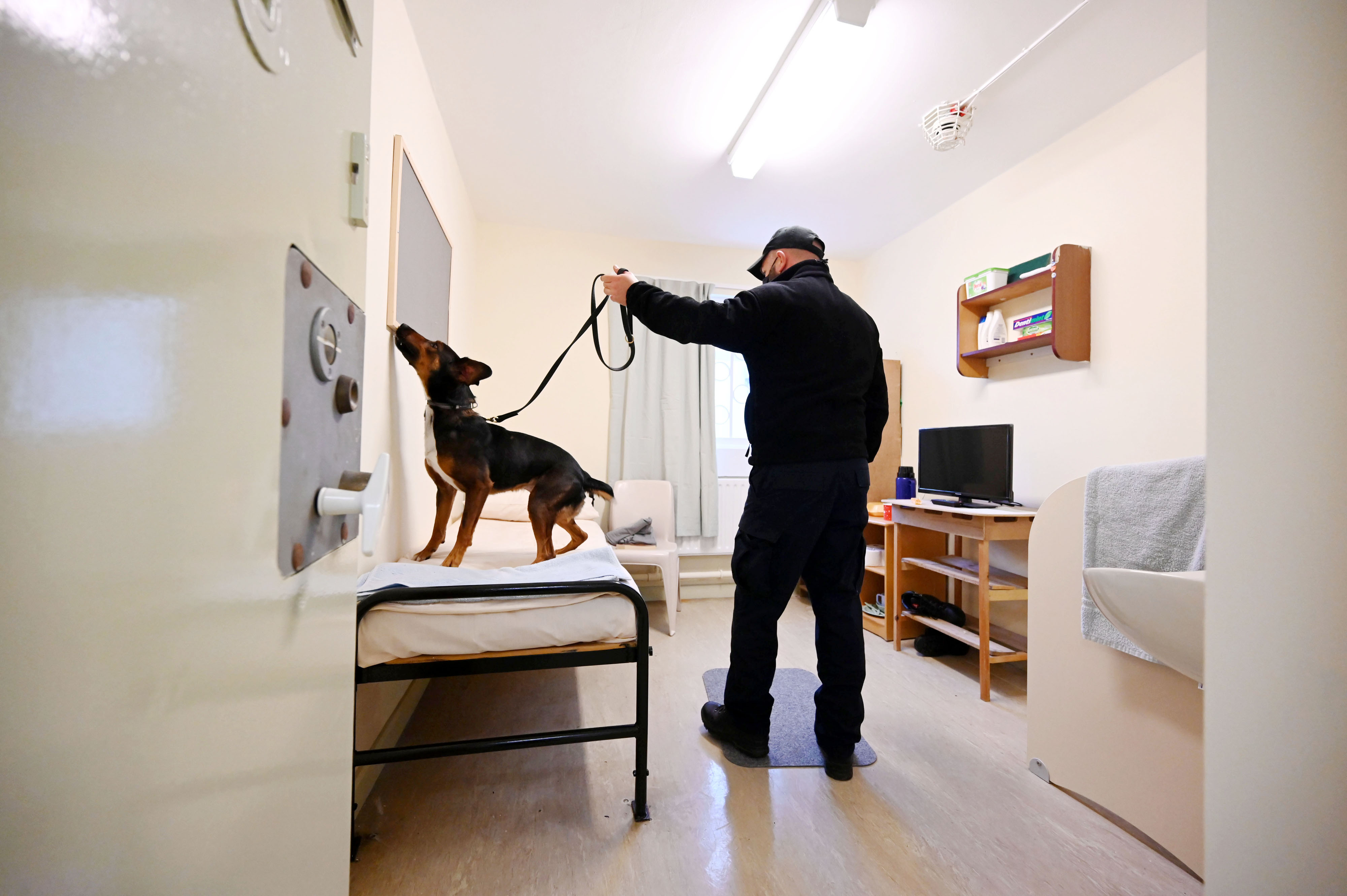 Speaking after a demonstration by prison dogs and their handlers at Maghaberry, Naomi Long said:

“We are absolutely determined to stem the supply of drugs to our prisons and there is no doubt dogs play an invaluable role in that fight. By finding and seizing these dangerous drugs and other contraband we are protecting those people in our care.

“It is of course alarming to learn about drugs being found in prison, but equally it shows the efforts of Prison Service and in particular the Dogs Section to seize these drugs, are largely successful.”

Minister Long added: “As a dog lover myself, I was delighted to learn that quite a number of the dogs in our prisons come from rescue centres. To see them trained to such a professional standard is impressive and I would commend Prison Service dog handlers for their work in the fight against drugs in prisons - ultimately they are saving lives.” 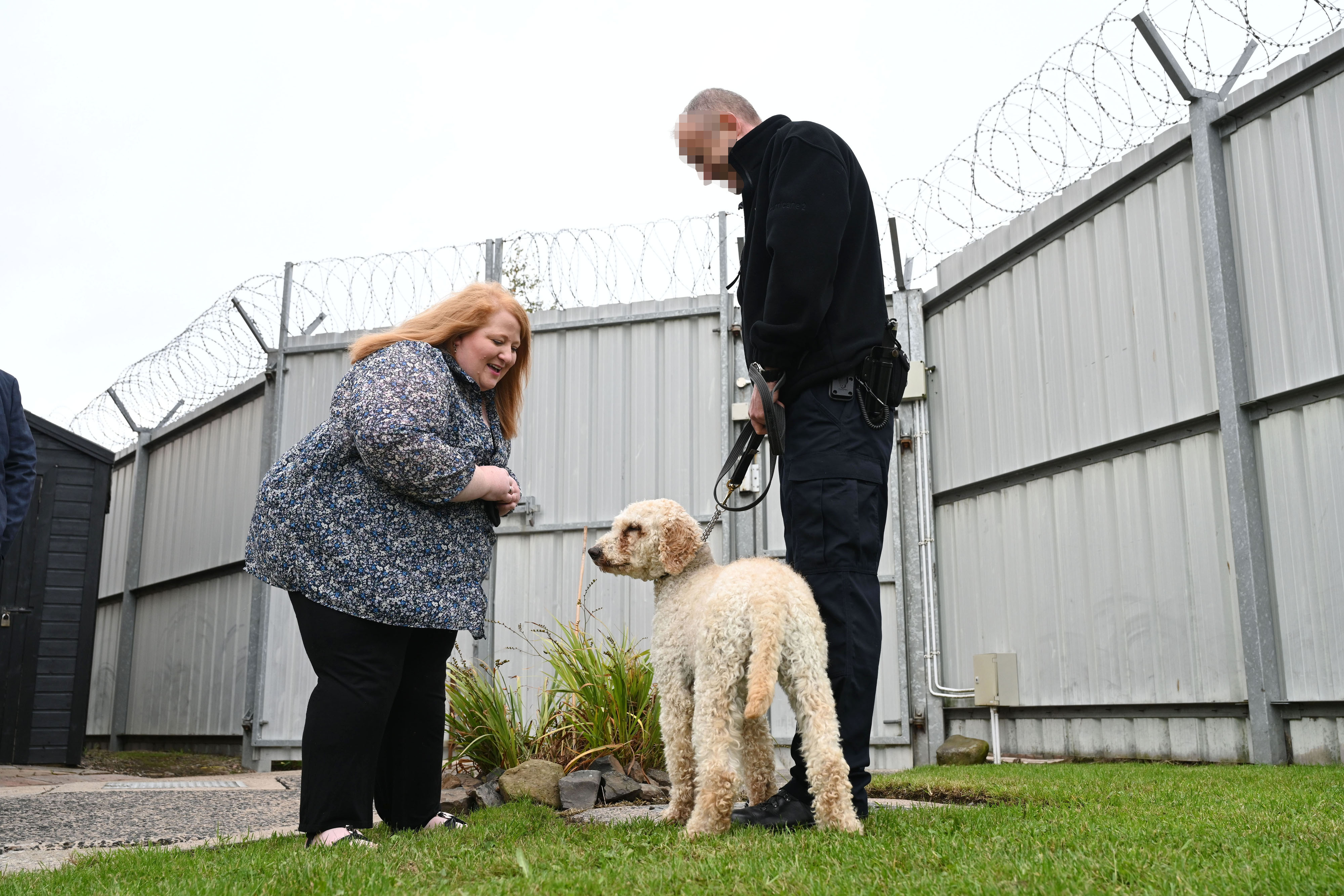 Governor Seaneen Farrelly, who has responsibility for the Prison Service Dogs Section, said: “All of our dogs are, where possible, acquired from animal rescue centres, here and across the UK. But when rescue dogs are not available we will bring them in from reputable breeders.

“We’ve had German Shepherds, Belgian Malinois and have in the past used Dutch Herders for general purpose and patrol dogs. Labradors, spaniels or a combination of both are our most common breeds for search work. However, we also use Pointers, Labradoodles, Weimaraners, Collie crosses or any combination of these which demonstrates an energy to search.

“In total we have 44 dogs, 26 of which are proactive and passive search dogs. Proactive dogs will search for drugs and mobile phones, phone chargers and sim cards. Passive dogs are deployed in each prison to search people, including visitors, and those prisoners returning from temporary release.

“The Dogs work a full range of shifts covering seven-days-a-week. They’ll work for six-seven years depending on their health and ability, and some have served us for 10 years, which is quite remarkable.”

Maghaberry Prison Governor David Savage said: “Before the pandemic there were in excess of 55,000 visitors a year to Maghaberry. Since Covid restrictions were introduced that figure has obviously dropped, but our dogs have still completed in excess of 16,000 visitor searches in that time. 576 individual positive indications were recorded which thwarted attempts to smuggle illegal and illicit articles into prison. 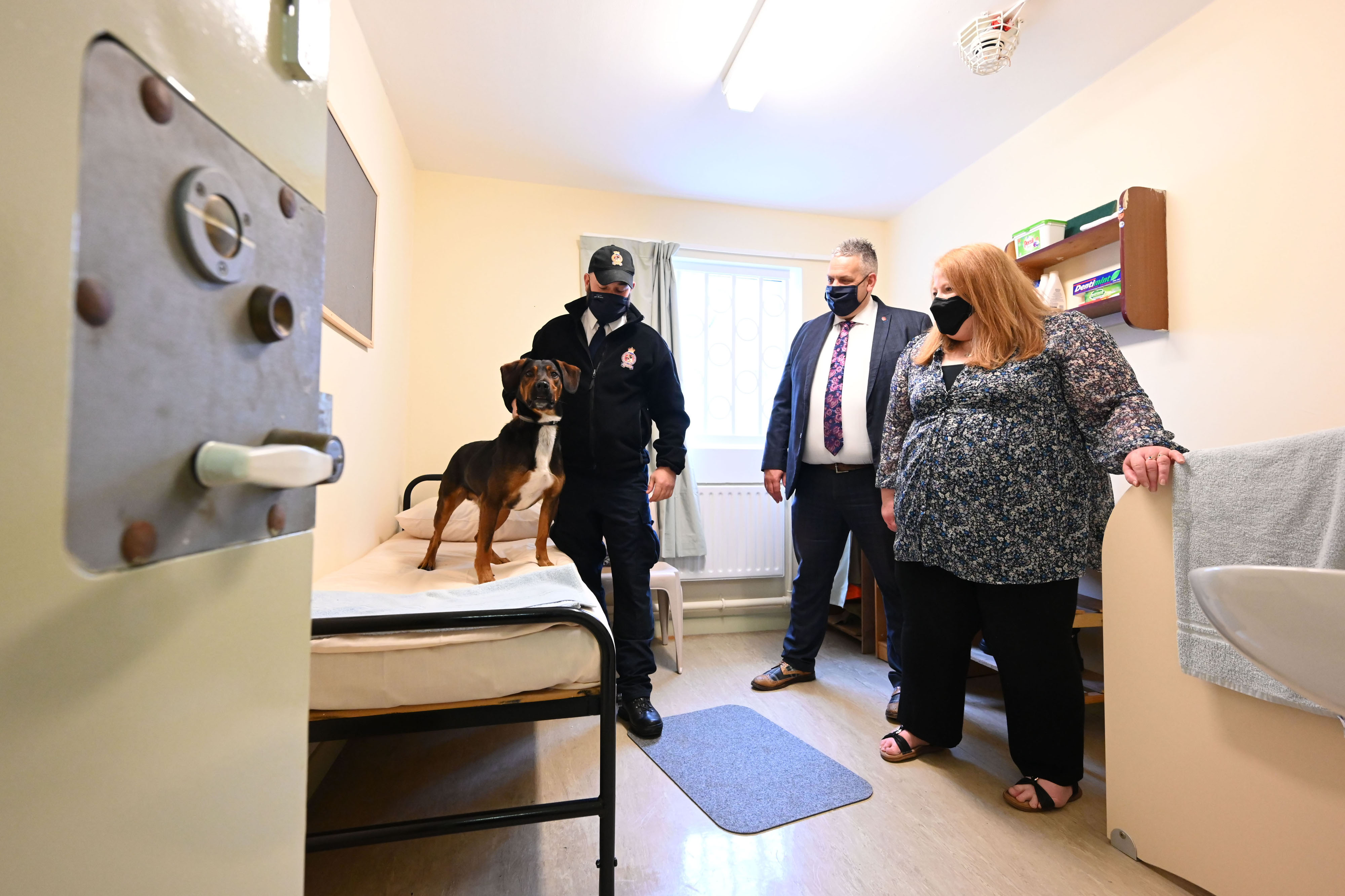 “Alongside this, 6,000 passive dog searches of prisoners being committed to prison or returning to prison following a short period of release, have been carried out.

“As things begin to open up again we know some people are determined to smuggle drugs into our prisons.  Our message is clear, we are equally determined to stop them and our dogs play a hugely important role in that work.”

Picture 1: A selection of drugs and mobile phones discovered by search dogs in Maghaberry Prison.

Picture 2: Cell searches by sniffer dogs have resulted in significant finds of drugs and mobile phones stashed by prisoners in Northern Ireland’s Prisons.

Picture 3: Justice Minister Naomi Long meets one of the Northern Ireland Prison Service dogs and its handler at Maghaberry Prison. Searches by sniffer dogs have resulted in significant finds of drugs and mobile phones stashed by prisoners.

Picture 4: Justice Minister Naomi Long and Maghaberry Prison Governor David Savage look on during a cell search demonstration by a sniffer dog and its handler. Searches by sniffer dogs have resulted in significant finds of drugs and mobile phones stashed by prisoners.

2.  Media enquiries should be directed to the Department of Justice Press Office via email to:  press.office@justice-ni.gov.uk

4.  The Executive Information Service operates an out of hours service for media enquiries only between 1800hrs and 0800hrs Monday to Friday and at weekends and public holidays. The duty press officer can be contacted on 028 9037 8110.